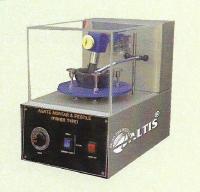 Electric Agate Mortar Pestle
Send Inquiry
Product Code : DE-169
Price And Quantity
Product Description
ALTIS Brand Agate Mortar & Pestle are very useful for grind solids into fine powders but under conditions that are highly controlled as to not produce any heating effects and to minimize and control any effects due to stretching of sometimes deformable materials. "ALTIS" Agate Mortar are control the grinding and also to virtually eliminate contamination from the the mortar and pestle set itself Agate is the preferred material and is used in laboratories. Agate Mortar is useful for dried spices and herbs from a cross-contamination cleanliness (hygiene) agate is for more desirable than the more porous porcelain.

"ALTIS" Make Agate Mortar Pestle for unattended grinding of non gummy and non fibrous materials. Extensively used for preparing coal samples for calorific tests. The mortar revolves and the pestle moves back and fourth in a pattern reaching all parts of the mortar. Its metallic housing with F.H.P. Motor driven detachable turn table of cast aluminum has adjustable posts to hold motors of 75 to 150 mm. dia. The arm of the Pestle driving mechanism has hinged heavy head which can be raised to inspect or remove the sample or additional material to be added as desired. A built-in-timer permits selection of grinding operation upto 60 minute. Speed controller / regulator also being provided to controlled speed from 20 to 180 RPM. The grinding vessel and mortar are completely covered by a clear acrylic cover. To operate on 220/230 volts. With 0-60 minute timer. 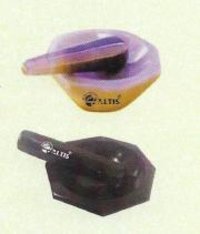 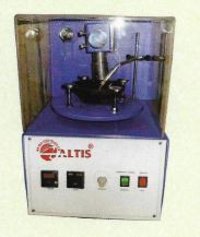